Here is a little post on our personal tips on things not to miss in the beautiful country of Peru, which is mainly food. I can’t help it, I like to eat.

In recent years, Peruvian food has experienced a big boom over here as well as in the USA, or so I have read. I have never tried it over here but if you know of a decent Peruvian restaurant, try it out. The food is amazing.

The absolutely not to be missed no way can you go to Peru and not eat it is: ceviche. Be it seafood or just fish, everyone must try a good ceviche when they’re in the country mainly because it’s Peru’s national dish and you will not find better/cheaper anywhere else. Obviously, the closer to the coast, the fresher the plate. From the market to the swishest restaurant in town, you’ll find it being ordered by locals who know their stuff which is always a good sign. Ceviche is raw fish cubed and served in a mixture of fresh lemon and lime juice, very thinly sliced red onion, sometimes cream of yellow chilli and the juice that runs off of the fish when it is being sliced.

Leche de tigre is the marinade of ceviche (as described above) which is also served alone and sworn to be a great hangover cure as well as an aphrodisiac. Some people order it with a shot of vodka for an added kick.

Tamales or Humitas are a great and cheap option for a cheap snack on the go. Both are made of corn and the former is steamed whereas the latter is boiled sometimes with pieces of cheese or meat or else sweetened with sugar and served wrapped in corn leaf. They are amazing and different to anything we have in England so definitely worth a try- if you’re in Cusco apparently there’s a little lady in the main square that sells them and I heard that they are de-lish.

Our pick of where to eat (but not necessarily the healthiest or most traditional option) is Campeón in Lima for the atmosphere and the simple fact that we would never have stumbled upon it by chance. I can imagine the sandwiches served there would be a perfect hangover cure.

Pisco Sour: Chileans and Peruvians will forever disagree on who invented Pisco (and in the airport in Tacna, Peru which is about forty minutes from Chile it is prohibited to take an international flight with Chilean Pisco which I find hilarious, sorry, I digress) which is potentially a good conversation starter between you and a local barman whilst you enjoy the mix of lemon, sugar, egg whites and Pisco all whizzed with ice to make an incredible cocktail with a serious punch. If like me and your stomach just can’t take raw egg, just ask for it without. It’ll be less frothy but equally as delicious.

Chicha morada is a juice made from purple maize with a sweet berry like taste which is native to Peru. Apparently it used to be produced by the natives chewing on the kernel and spitting it out, but now it’s mixed with water.

Our pick of places in Peru was Mancora. Perhaps this would not be the case if we had gone to Peru in the summer time, or if I wasn’t so fickle and so easily pleased by a nice beach and good cheap food…but I am so I loved Mancora. It is also for the fact that we had great company in the lovely hostel that we stayed in and we asked locals what beach and food they recommended, so all worked out in our favour.

Among the many activities that Peru’s varied climate allows for, surfing is very popular amongst locals and tourists. We didn’t stop off along the entire coast but we did drive it and the most popular spots were Lobitos, Máncora and Lima from what I could see, although we were not there in surf season so others may disagree.

Driving in Peru was great and we didn’t have any issues with police or feeling unsafe but that was partly to do with us always putting our van into a car park and not taking any risks at all. Drivers, on the other hand are not always very safe and we had a few episodes on mountain roads of shouting ‘woaaaah’ whilst we watched other drivers overtaking each other around corners and the like. Petrol isn’t cheap and neither are the tolls but food and accommodation make up for it.

So there you go, Peru. Definitely worth a trip- as soon as you’re over the border from Chile you feel like you’re in a different world and there is so much to eat, see, listen to…we love Peru.

If anyone else has been, please feel free to chip in with your own comments or opinions on what to see and do. 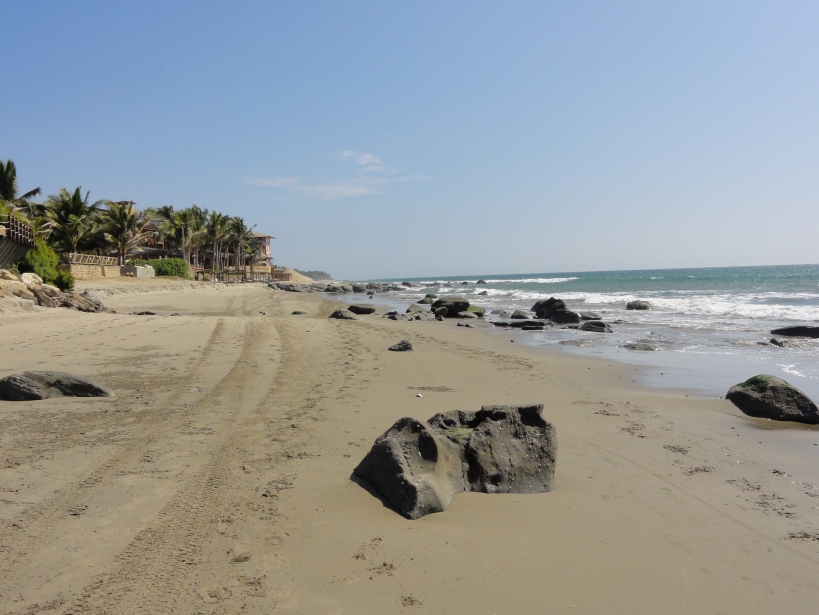 A deserted beach in Mancora. Love it.