On Sunday morning we headed out of Cusco and over to Nazca to see the famous Nazca lines and carry on our journey to the coasts of Peru.

We assumed the drive would be nice and straightforward…we really should stop assuming things because we could not have been more wrong, it was eleven hours of bobbing between 4500 metres to 2000 metres altitude and a lot of tight curves around the mountains featuring a storm on the altiplano which kept Rulo very alert…I slept through most of it. At one point we had to hit the breaks on a tight curve because a bus came charging towards us at God knows what speed. In hindsight it all adds to the adventure (!). 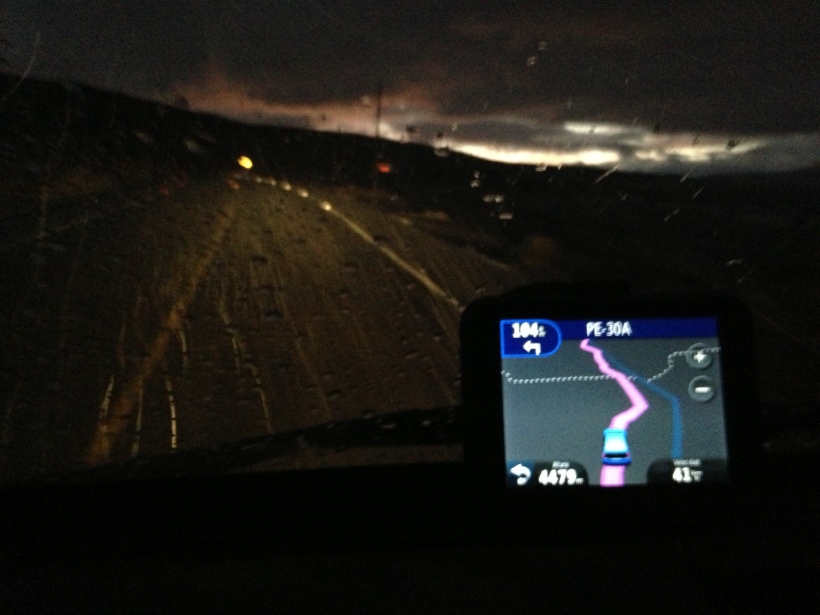 4479 metres up and in the midst of a storm, I was tucked up in blankets and managed a two hour nap. 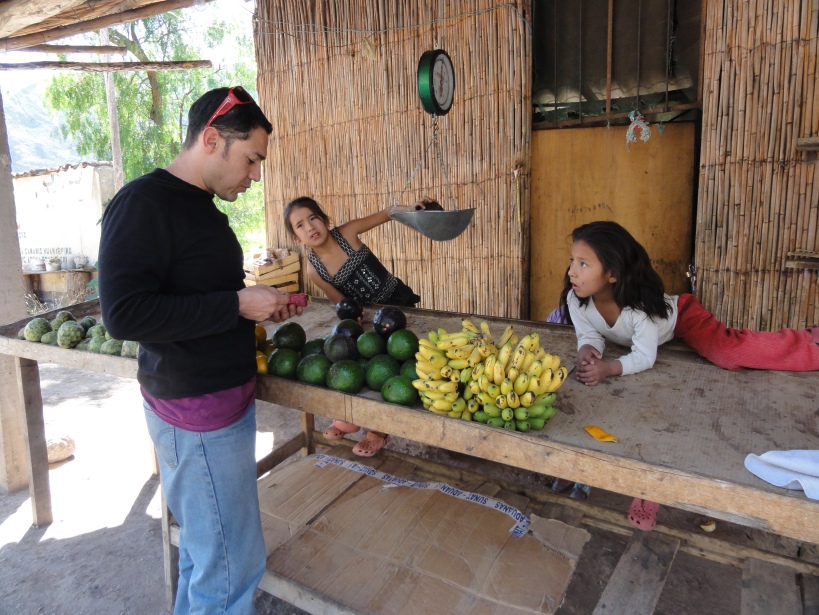 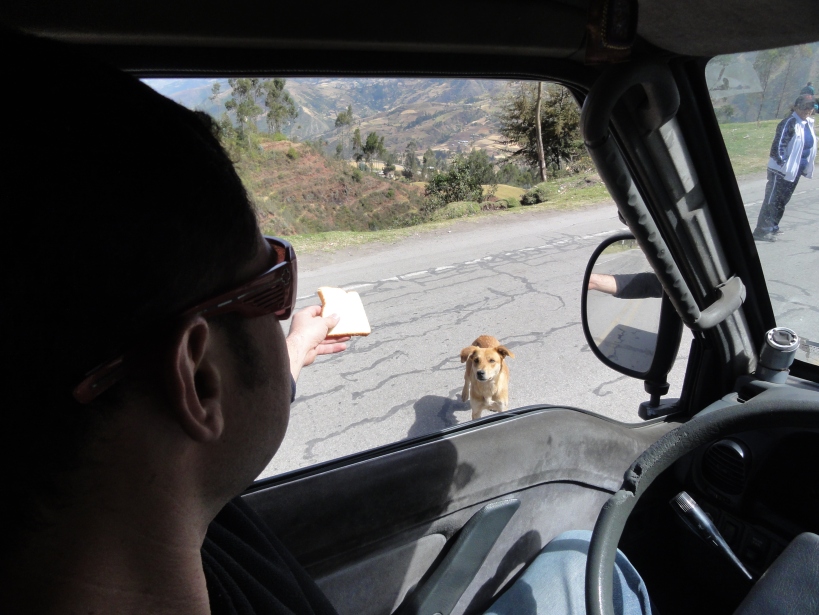 Making friends when we were waiting to cross a one lane road. This little munchkin left with a satisfied tummy after being given food by nearly everyone in the queue

After driving up and down and round and round, we arrived quite late in Nazca and there was one thing on our minds- food. We drove along the Panamerican Highway and found exactly what we needed: a stall selling chaufita, Peruvian style egg fried rice with a hostel and car park opposite. We got the hostel down to 40 soles/9.50 gbp for the two of us and although it was a bit noisy we had a great night’s sleep because the room was spick and span and the bed was made perfectly. Gladys, the lady in charge was a straight talker but very, very sweet. 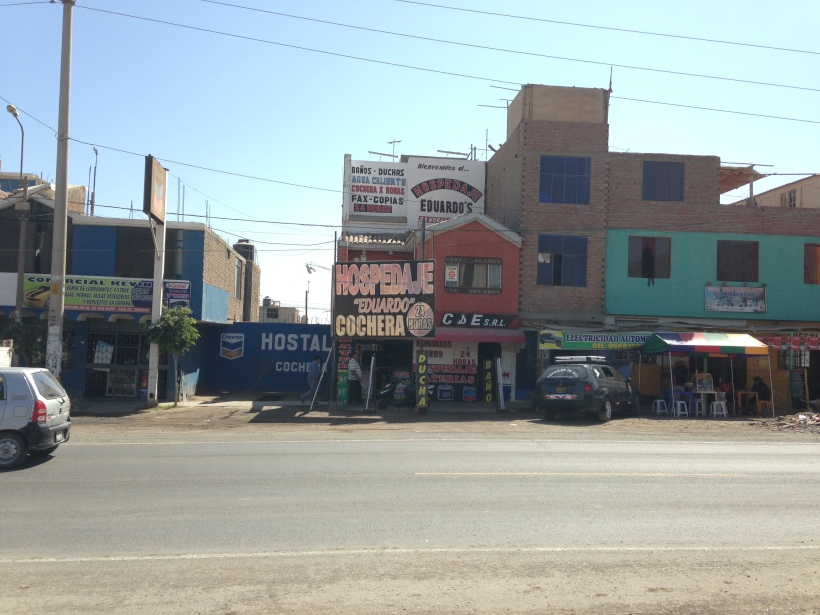 Hospedaje Eduardo which also turned out to be a mechanics downstairs, perfect.

The next morning we had a cheap and cheerful breakfast of juice and an avocado sandwich in the market on the street behind the hostel and then headed off to see the lines and on to Paracas. Driving through Nazca I was surprised by the amount of restaurants and building work going on. The sun was out and we were happy, after it being so cold at night in Cusco that I wouldn’t dare wash my face, we were soaking up the sunshine and on the road again.

Nazca is named after the Nazca people who archeologists think created the lines between 200 BC and 600 AD in the Pampa Colorada, about ten minutes drive from Nazca City. The lines were created by clearing the darker surface soil to reveal the lighter soil beneath, and I have to say they are amazing. Just thinking that thousands of years ago people dedicated time to something that we can still see today, although we don’t know why they did it, is incredible. Some of the lines are up to six miles long and feature monkeys, lizards and hummingbirds.

There are three options to see the Nazca lines; climb the very visible hill on the left side as you approach them, pay 2 soles per person/0.48pence to climb the red tower which gives you a view of three of the various large drawings in the area or get a plane for 100 usd to fly for half an hour above the area and see the lines from a bird’s eye view. Not only are we on a budget, a flight from Tacna to Lima would be the same price (or cheaper) so we opted out of that. However, if you have the funds I’m sure it would be a great experience.

We climbed the red tower and could see three of the lines; a tree, hands and part of one which I couldn’t make out because the motorway is going through it. 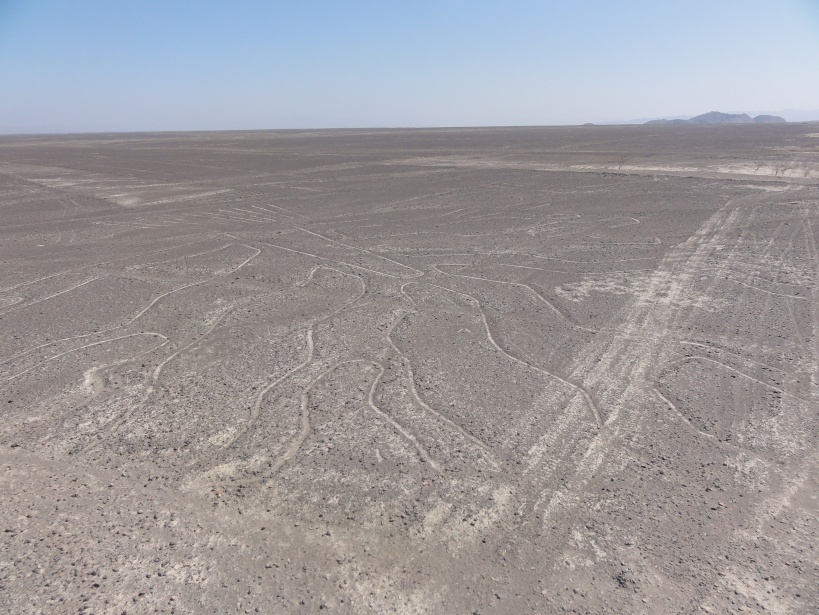 My best attempt at capturing the tree. If you tilt your head a little bit to the right you can see the roots.

Overall, if you’re on a budget and can’t make it to Nazca I wouldn’t worry, but if you have the time and money they make a nice little stop off.

Next up: A little break in Paracas and a visit to see the penguins before hitting Lima.